John Mallee was working a White Sox youth baseball camp in the mid-1990s and supposed to warm up the crowd and introduce major-league coach Ron Jackson. Except Mallee kept talking to the point where Jackson saw something in the young guy who gave private hitting lessons to local kids.

“Papa Jack said, ‘Hey, you’re really good at this,’” Mallee recalled. “I said, ‘Coach, who would hire me?’ I hit .220 in the minor leagues. I had an earring and I was the last person to get rid of a mullet and tight-rolled jeans. Who would hire me?”

Now dressed in a red Philadelphia Phillies hooded sweatshirt for a brisk June night at Wrigley Field, Mallee stopped for a moment on Tuesday before walking up to the batting cage and the spectacular view directly behind home plate.

“And look at me now, I’m a World Series champ,” Mallee said before the Phillies celebrated Jake Arrieta Day with a 6-1 victory over the Cubs. “Crazy.”

Mallee braced for the whirlwind of emotions as he drove to work from his offseason home in Northwest Indiana. As the son of a Chicago cop and a Mount Carmel High School graduate, Mallee worked his ass off to get a dream job as Cubs hitting coach, starting out as a Class-A instructor for the Milwaukee Brewers in places like Beloit, Wisconsin, and Stockton, California, before climbing the ladder as a coordinator with the Florida Marlins.

Team president Theo Epstein and his baseball operations staff immediately targeted Mallee to replace Bill Mueller after a fifth straight fifth-place finish in 2014. As the Houston Astros hitting coach, Mallee had exposure to perhaps the most data-driven organization in professional sports, working with Jose Altuve, George Springer and what would become a World Series core. 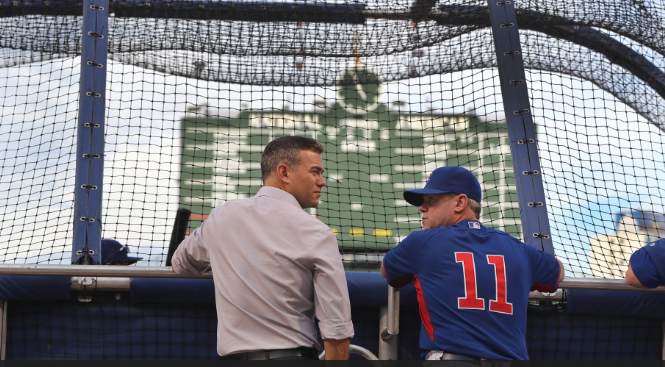 “Well, I had butterflies driving up, like I did every day when I came here as a coach,” Mallee said. “I would get nervous before every Cub game for three years. I just wanted to do my best for the team and make sure they’re prepared. My job was to prep them and I wanted to make sure I gave them everything they needed. Pulling up here today, I had my son in the car, which helps.

“Obviously, we know how it all went down. I’m not upset with anybody. Theo’s job is to do what’s best for the brand. I think one of the reasons he’s one of the best leaders in the world is because if he thinks it’s best for the organization, he [puts] personal feelings aside.

“He and I got along great. He felt that they needed to take the offense to another level and that there was somebody else that was better equipped to do that than me.

“Do I agree with it? No. Do I accept it? Absolutely. I can’t be upset with him because that’s just his opinion and he’s a very smart man and very successful. He’s still a friend of mine and the Cubs will always be something special to me. I was a part of history and I had something to do with it.”

Are you OK with Joe?

Those were really the only awkward pauses during a five-minute conversation with a small group of reporters by the visiting dugout. Maddon, who is usually a straight shooter with the media, gave his entire coaching staff a vote of confidence before an elimination game against the Los Angeles Dodgers last October and raved about the group’s “synergy” and “cross-pollination.” By the end of the week, the Cubs had fired pitching coach Chris Bosio. By the end of the month, the Cubs had hired Davis, swapped out third base coach Gary Jones for Brian Butterfield and reached an agreement with Jim Hickey, Maddon’s old Tampa Bay pitching coach.

Mallee has also noticed Maddon’s recent riffs on exit velocity and launch angle during his daily press briefings, which are definitely entertaining but sometimes sound like subtle criticisms of the old hitting coach.

“When the kids are aware of it now, you have to show them what all that truly means. The 7-to-15-degree launch angle equates to a 75-percent hit. Well, that’s what we’re trying to do. We’re trying to get a hit 75 percent of the time. And if you miss under it, cool. If you miss over it a little bit, cool, you’re still hitting the ball hard in the middle of the field.

“That’s the philosophy. It’s not really talking about launch angles as much as hitting line drives, utilizing the whole field.” 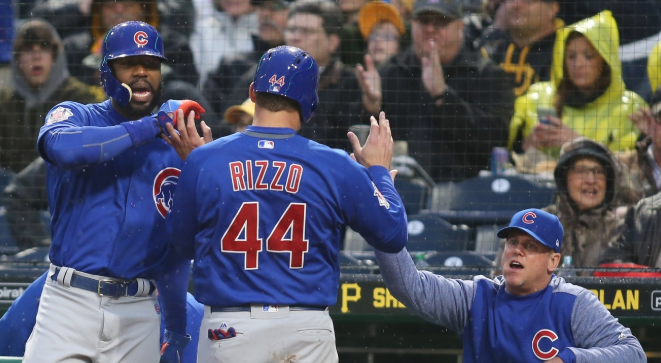 Where the tension around Bosio had been building — he needed that edge and sense of conviction to pitch 11 years in the big leagues and already worked for three different Cubs managers — Mallee’s dismissal registered surprise even inside the organization.

But this is the implicit part of The Cubs Way: Mallee had to go because management saw a potential new-voice upgrade with Davis, an All-Star switch-hitter who worked for the Red Sox and Oakland A’s after a 19-year playing career that overlapped with Maddon’s coaching days.

The Cubs scored 822 runs last season — more than any NL team except for the Colorado Rockies — and then hit .168 with 105 strikeouts during 10 playoff games.

“If you look at what we did in ’16, in the playoffs and the World Series, we used the whole field,” Mallee said. “It all depends on how the pitcher’s going to pitch you, right? They say you need to be able to beat good pitching. Not that many people beat good pitching, the Scherzers and the Strasburgs of the world.

“The philosophy wasn’t going to be try to pull everything or just try to hit homers. We preached all of those things and sometimes the pitcher doesn’t cooperate. Maybe they did a little more in ’16 than they did towards the end of ’17.”

Just as Bosio had options before joining the Detroit Tigers, Mallee landed in a good situation with the Phillies, a sleeping giant that guaranteed Arrieta $75 million during spring training and will be in the middle of the Bryce Harper/Manny Machado sweepstakes this winter.

In many ways, hitting coach is a thankless job, staring at the computer, crunching numbers and filing reports for millionaires who have their own ideas and advisors. It means getting little credit — Anthony Rizzo and Kris Bryant are awesome baseball players — and taking a lot of unnecessary blame.

Mallee still loved it. Mallee traveled to Puerto Rico to meet with Javier Báez after he accepted the job. Mallee gave the front office a detailed scouting report on Dexter Fowler after working with him in Houston. Mallee went back to the team’s Arizona complex shortly after the championship parade to help Jason Heyward with his swing. Mallee either turned down interview requests or toned down his answers because he didn’t want to make it about him.

“It was really good to see Mallee,” Rizzo said at his locker after the game. “It was emotional seeing Mallee because it was just such good times with all of us growing up with him as our hitting coach.”

This much will never change: it’s always about the players making plays and Mallee was there when it happened. How many Chicago kids grew up dreaming of winning the World Series with the Cubs? Not bad for that dude with the mullet and an earring who played two seasons in Philadelphia’s farm system and wondered how he’d ever get hired.